UC San Diego Students are starting a business for an eco-friendly cube shaped planter that can be used for indoor gardening.  The EcoQube Air Desktop Greenhouse grows plants or food without direct sunlight and cleans the air at the same time. EcoQube Air greenhouse cube comes with a water reservoir and induction pump for quiet flow, a hepa-like filter for air purification, bright LEDs for lighting, and dual fans. 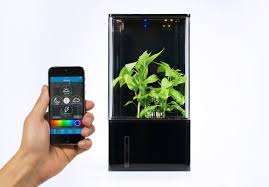 EcoQube is a cube shaped greenhouse that can be placed on your desk and adds healthy air and smart light therapy to you room.  It is a solution for indoor gardening and controls the amount of water and nutrients that plants need.  It uses 90% less water than traditional indoor planters and comes a special NASA mixture instead of soil to facilitate healthy plant growth.  The air filtration system consists of 3 different stages to make the air you breathe cleaner.

The EcoQube Air raised $315,019 through an Indiegogo crowdfunding campaign for its desktop greenhouse.  The UC San Diego Students organization launched the money raising campaign in April 2016 and reached its initial funding goal of $25,000.

EcoQube Air generated reward levels for its backers that consisted of:

EcoQube Air creators include Kevin Liang, Natasha Hoskins, and Mark Pecota and are based in San Diego California.